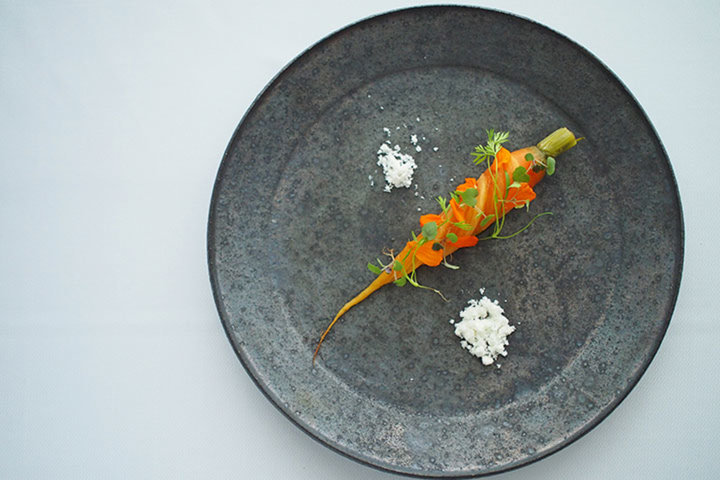 Yamaguchi prefecture is a famous ingredient treasury nestled between mountains and ocean. It was also elected as CNN's "Japan's 34 most beautiful places" with "Motonosumi-Inari Torii gates" (※1). This is where you will find “le-sorcier,” a famous French restaurant and the most exclusive dining spot in the Chugoku region, since its location and contact information are closely-guarded secret. Lunch and dinner are both restricted to a single party, and chefs from around the world sing the praises of this hidden gem, known only to those “in the know.”

The Owner-Chef Keiichi Hashimoto came to Tokyo after he graduated from culinary school in Osaka to study in various French restaurants in Tokyo and has worked as chefs in many places. In July of 2015, he returned to his hometown in Shunan-city, Yamaguchi, where he opened “le-sorcier,” which was recognized in the 2018 world-famous gourmand guide “Gault et Millau” as the top culinary spot of western Yamaguchi prefecture. Furthermore, Mr. Keiichi Hashimoto is awarded as the Japan's "remarkable chef", like Alain Ducasse and Alfonso Iaccarino in Europe.(※2)

He gets his inspiration from the ingredients and tools he uses, assembling them one by one as puzzle pieces, and serves the dish that has the landscape. Over 70 percent of the ingredients are sourced directly from the Yamaguchi area, considering elements such as the terroir of the land and using organic and pesticide-free fruits and vegetables, along with the bounty of the Seto Inland Sea and the ocean surrounding Japan, Atou wagyu, and the Kuro-Kashiwa chickens whose breed was named a natural monument of Japan. The dishes Chef Hashimoto creates, based on his steadfast commitment to making French cuisine by using ingredients that are close to home, has attracted attention even from European media, and his thoroughly original gastronomical delights have charmed many gourmets.

Opening the door to “le-sorcier,” which belies the existence of a restaurant beyond, there is one single table that can seat up to 6 people during lunch, or 4 for dinner. While it may strike some as unusual, it also gives the impression of being invited into the chef’s own personal domain. Chef Hashimoto says, “I want people to experience the charm of the region while being enveloped in all the activity related to creating their meals.” It is worth traveling from both near and far to experience the new expression of cuisine made with Yamaguchi ingredients in this restaurant.

The address will be provided when the reservation is confirmed.