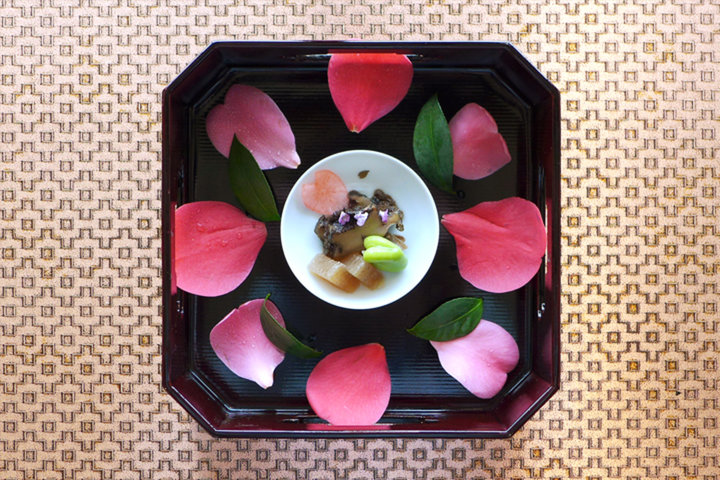 A 15-minute walk from JR Onomichi Station, situated near ""Shimanami Kaido (※),"" the long-established world gourmet guide awarded Japanese cuisine restaurant “Kappo Higashiyama.” After studying under the founder, Mr. Masashi Yokoyama was appointed the second generation master in 1981. With a wide outlook that is the result of over 15 years studying Urasenke (tea ceremony) and Onomichi yaki (ceramic art ceramics), Mr. Yokoyama offers “Japanese cuisine worthy of Onomichi.” Since its inception in 1962, it has been a well-known restaurant that continues to be loved by its many guests. They can speak English, Italian and Chinese.

Using seasonal fish and vegetables from Onomichi, and starting with only the highest quality ingredients, including edible wild vegetables and greens harvested by himself. With staple dishes such as sashimi and Takiawase (fish and vegetables cooked separately but served together), the cuisine is orthodox Japanese cooking that makes use of ingredients in a simple manner, but isn’t tied down by the classics, and is a production directed according to modern taste. In addition, the third generation of the family, Mr. Daijiro Yokoyama, currently the sous chef, has been studying at the Japan branch of Milan’s world gourmet guide awardred, “Ristorante Sadler” as well as other famous Italian restaurants in Tokyo, and makes use of the unique Italian fire pan technique in grilled and fried dishes.

The Japanese sake selection centers around Hiroshima-distilled favorites such as “Kamotsuru,” “Zuikan,” and “Kirei,” and the “Hire sake” which makes use of puffer fins processed and dried in-store is also recommended. The restaurant is well-suited to foreign tourists and their families; dishes can be changed according to individual likes and dislikes, and a kids menu consultation is also possible.

The interior features counter seating, recessed-floor tables, and standard tables, as well as 4 private tatami rooms. The ceilings of the private rooms are decorated with lucky “good fortune” and “sea bream” motifs, painted by Onomichi’s famous painter, Toyotaro Mizoue, making them well-suited for occasions of celebration. By all means, we urge you to come and taste the seasons of Onomichi at a famous restaurant that has brought guests from all over the country for many years.

※ Shimanami Kaido: One of the world's most incredible bike routes