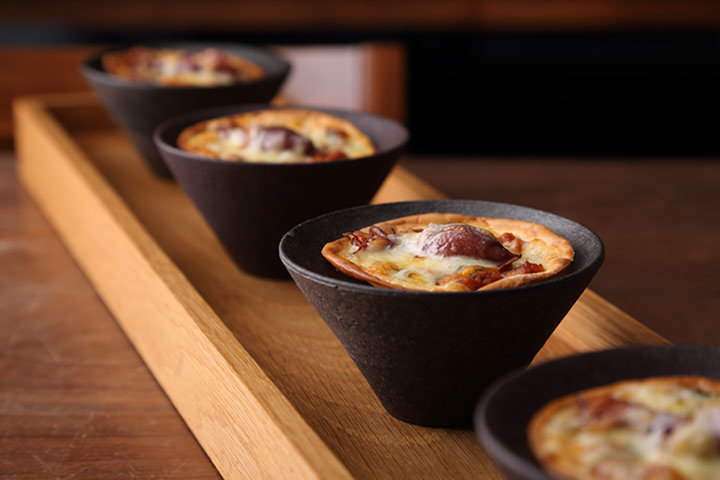 With food and a space that is not limited by genres, this is a place of exquisite comfort

"Mikazuki" is located on the 2nd floor of a building along Gaien-Nishi Dori, Nishi-Azabu, Tokyo. The restaurant works with the concept of being the kind of place you imagine would exist but that you actually cannot find elsewhere. The food created by Chef Masafumi Iura is characterized by its freedom and good taste and is all the talk among gourmets.

Mr. Iura used to work in the rag trade but switched over to the food and beverage industry just before reaching 30, thinking that he wanted to do the kind of work where he was involved from start to finish. He gained experience working in the bistro wine bar "Goblin" and Japanese cuisine restaurants in Nishi-Azabu and also got himself qualified as a sommelier. He opened "Mikazuki" at the age of 35.

What sets "Mikazuki" apart from other restaurants is that it is not the kind of place that bases itself, first and foremost, on a genre. “Essentially, food is something that gives thanks to its ingredients and is something that you cook thinking about the people who will eat it,” explains the Chef Iura. While Japanese cuisine forms the basis of his cooking, he also frequently thinks about the people who will be eating his dishes and works from the essentials to go beyond the limits of a genre.“I create my dishes for family and important people by incorporating surprise. Delicate but lively, something that you will not tire of even if it tastes amazing. Full of freedom. This is my credo for food.”

A popular dish at the restaurant is the shabu-shabu of Matsuzaka pork and scallions. Ingredients are scallions and Matsuzaka pork loin and belly. The thinly sliced scallions are placed in properly made stock. They are then rolled in the pork slices, cooked shabu-shabu style, and dipped in beaten egg. The dish is rounded off with made-to-order, ultra-thin ramen noodles, which are also eaten with beaten egg. Black pepper is ground into the egg, making the eggs and ramen taste like carbonara.

Another dish that sometimes makes an appearance at "Mikazuki" and is made from seasonal vegetables and is called “kaleidoscope of sea urchin and colorful vegetables.” These colorful vegetables are spread out a base of soy milk blancmange to look like the view inside a kaleidoscope and are covered in sea urchins and red bean paste. With a yuzu citrus scent also making a contribution, this dish, which has a Japanese sensibility that runs contrary to its appearance and its name, appeals to all the five senses. Iura’s credo can be observed just by looking at these 2 dishes.

When it comes to alcohol, "Mikazuki" serves 3 varieties of craft beer and 7 different kinds of both sake and shochu. 25 different kinds of wine are on offer, with champagne, white wine, rosé, red wine, and dessert wine mainly grown in France, Italy, Germany, and Austria. On top of this, Mikazuki also stocks Japanese-produced makgeolli, Shaoxing rice wine, single malt whiskey, and Armagnac—a selection as wide as the range of dishes on offer. Another of the pleasures at Mikazuki is the reverse-side menu which is hidden behind the drinks menu display.

Monday, First Sunday of the month 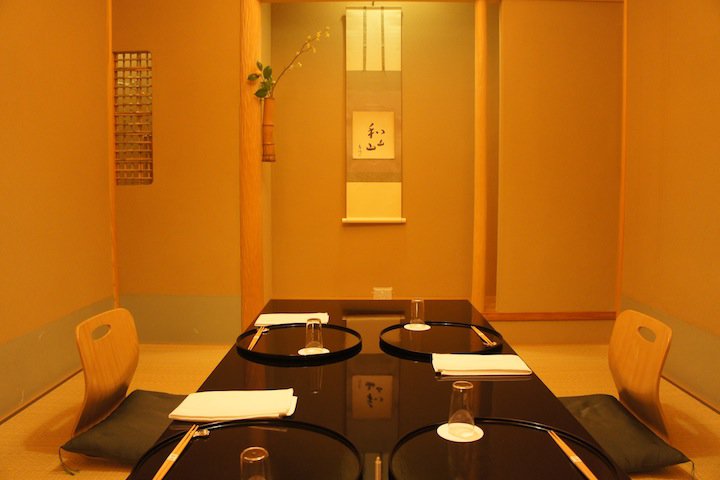