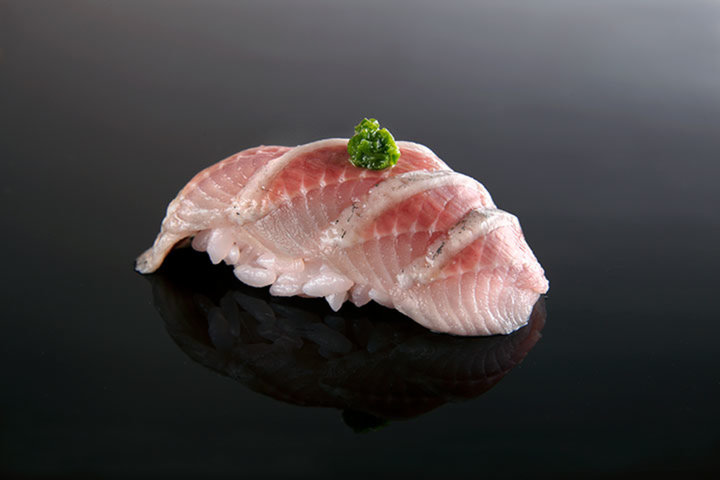 Authentic sushi in Tachikawa. Experience and skills honed from the age of 15 flourish

Tachikawa is a town in the suburbs of Tokyo lined with commercial facilities and office buildings and crowded with many eating and drinking establishments. A 5-minute walk away from the bustling station, "Sushi Kitamura" sits in a quiet spot. The owner, Mr. Naoki Kitamura, began his training in sushi restaurants at the age of 15, built up experience working in restaurants in Shinjuku and Meguro and as the second-in-command at Conrad Tokyo’s Kazahana until the time was ripe in 2016 to set up on his own. Exquisite sushi made possible by many years of experience have earned him a solid reputation, and sushi lovers from neighboring cities and even the heart of the metropolis seek out this famous yet hidden-away restaurant.

For the vinegared rice that forms the basis of sushi, he uses red Junmai-shu sake vinegar made from an ancient rice variety, which gives it a refreshing taste. The rice is the select "Tsuyahime" variety from Yamagata, with its large, distinct grains that have umami flavor and sweetness. He is very particular about where he buys each and every ingredient, and his tuna is from Hichou, one of the most famous tuna wholesalers at the Tsukiji market. Also, he orders seasonal ingredients directly from suppliers all over the country, such as red sea urchin, bigfin reef squid, and tilefish from Fukuoka, and purple sea urchin and barfin flounder from Hakodate. And to the carefully selected seafood, he adds his personal touch to bring out the deliciousness in his sushi. He also wants his customers to enjoy traditional Edo-mae style sushi, which requires considerable time and effort to produce such specialties as gizzard shad, sea bream, clams, and boiled conger eel.

The Chef’s Choice Course consists of the delicate flavor of white fish sashimi intertwined with the rice and other tidbits to create contrasts. He monitors the speed at which his guests eat and drink and serves them snacks and sushi with perfect timing. There are always about 10 kinds of sake available, served in quantities from as small as 90cc, so that various kinds can be combined with the different dishes. The hostess, who is qualified as a sake sommelier, also makes suggestions tailored to the preferences of the guests. Refreshing white wines such as Chablis and Champagne are available. One of the charms of Sushi Kitamura is that it allows non-drinkers to be able to enjoy their meal without alcohol, such as providing pickled vegetable dishes as snacks rather than the delicacies that go with sake.