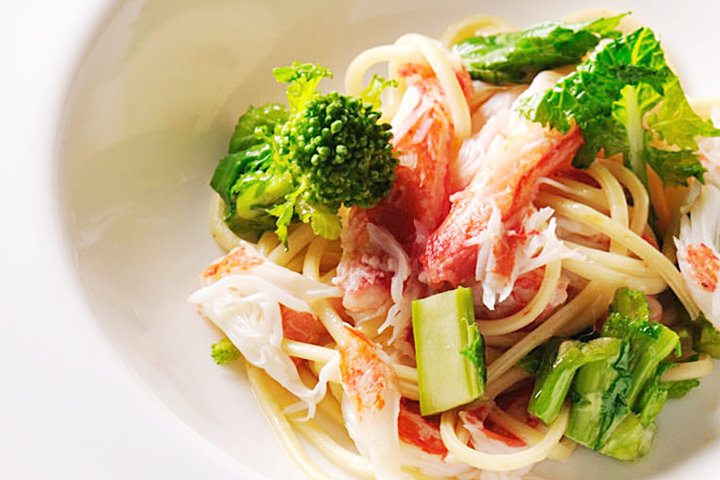 Ranked by a famous gourmet guide as the best Italian restaurant in the Setouchi area, serving “Italian cuisine using ingredients from the sea and the farm" and prepared by Chef Masayuki Okuda

Miyajima Bocca Al-che-cciano is just a 2-minute walk from the ferry terminal to Miyajima, the World Heritage Site in Hiroshima. It was opened in 2015 by Chef Masayuki Okuda, the maestro of natural Italian cuisine in Yamagata, as his base in West Japan (*). The gourmet guide "Gault & Millau Tokyo, Hokuriku, Setouchi 2018" ranks it as the best Italian restaurant in the Setouchi area. At Miyajima Bocca Al-che-cciano, Chef Ken Sasaki, who has been training under Chef Okuda since he was a student, carries on the Okuda spirit.

Chef Okuda is making his mark across the world. In 2006, he was selected to represent Japan at the Terra Madre conference hosted by Slow Food International. In 2011, he worked with the Japanese Embassy to promote ingredients produced in Japan at the San Sebastián Gastronomika, an international culinary assembly held in Spain. In 2012 , he was named “Peace Ambassador for Food” by the Republic of San Marino, and cooked for the Pope. He then supervised the cuisine of Japan Night at the World Economic Forum in Davos, Switzerland. In 2016, he was awarded the Premio sostenibilità (Bronze Award) at the Vegetarian Chance Contest held in Milan, Italy, as well as being named “Cooking Master” (Silver Award) by the Japanese Ministry of Agriculture, Forestry and Fisheries (MAFF). In 2018, he won the MAFF Food Industry Affairs Bureau Director-General's Award.
Chef Okuda's dishes are based on the breadth of his "memory on the taste of ingredients" that he cultivated by traveling around the world in this way. He deals with over 500 suppliers for ingredients, the highest number in Japan. He said that the wide variety of choices enables him to come up with combinations that create the impression of "1+1=5". For example, he serves grilled conger eel, a specialty of Hiroshima, together with grilled eggplant and balsamic tapenade, which changes the taste to something like kabayaki when enjoy together. Okuda's book, which outlines these signature equations, was awarded 1st place in the category "Culinary Heritage" at the Gourmand World Cookbook Awards, the most prestigious awards for cookbooks in the world. Chef Okuda shows off his skills at Miyajima Bocca Al-che-cciano several times a month, featuring the newest ingredients and combinations that he discovered while working all over the world.

Miyajima Bocca Al-che-cciano looks out on the Seto Inland Sea, and the dining room, which faces the World Heritage Site of Itsukushima Shrine, has both tables. The interior was designed by Suppose Design Office Co., Ltd, the leading architectural design firm in Hiroshima, and is reminiscent of a Mediterranean resort. There are foreign-language menus for the many overseas guests that visit Miyajima. Halal and vegetarian menus are also available. Families with small children are also welcomed warmly. Please definitely try "Okuda's Italian cuisine of the world" when you visit Miyajima