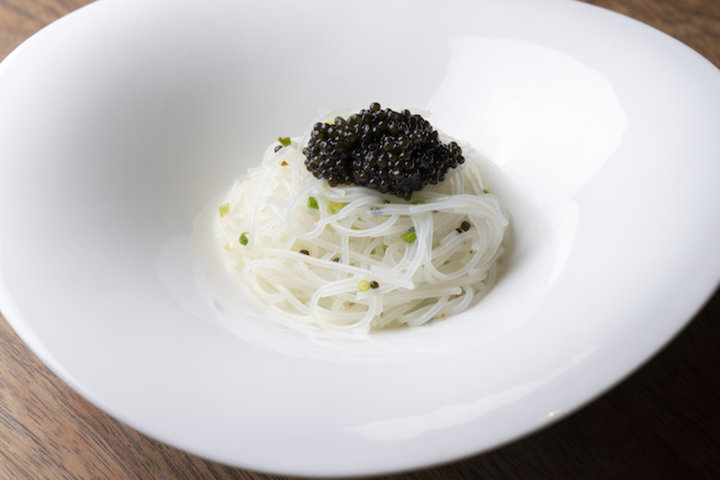 Pushing the boundaries of Chinese with remarkable sense and originality

"Kaikatei" is a Chinese restaurant located near the Yanagase shopping area in the government office quarters of Gifu City, Gifu Prefecture. This is where second-generation owner Takamichi Furuta, who has inherited the will of his father, practices his culinary skills.

"Kaikatei" was originally opened by Takamichi's father, Hitoshi Furuta, in 1978. It soon attracted attention for its exquisitely original dishes that pushed the boundaries of Chinese cuisine and became well known both inside and outside of Japan. In 2014, Hitoshi Furuta decided that the time was ripe to open a new Chinese restaurant in Ginza, Tokyo. He named this restaurant "Furuta" after himself. He entrusted "Kaikatei" to his oldest son, Takamichi. His second son, Satoshi, opened a French restaurant called Restaurant "Satoshi.F." in Gifu. In 2016, Satoshi also moved to Ginza to open "CHIUnE", a highly popular restaurant that has drawn the attention of many gourmets. It seems that both sons inherited their father's culinary talent.

When it comes to Kaikatei's dishes, Takamichi Furuta explains that "First, I imagine the most delicious way of eating whichever ingredient I'm working with, then I try to create that image." Rather than limiting himself to local produce, he also includes seafood from Hokkaido and western produce such as vegetables from France. The standard menu features cold rice noodles with caviar, shark fin with Shantung soup, and abalone liver with oyster sauce and Chinese white cabbage cream. In addition to the seasonal dishes inherited from his father, he continues to create his own specialties, including sweetfish spring rolls for summer and tofu using tiger pufferfish roe for winter. To complement the food, he keeps a selection of 6 types of Shaoxing wine, ranging from 5 to 30 years old, a wide range of wine from Champagne, California, Australia, France and Italy, as well as sake, shochu, whiskey, and beer, allowing him to flexibly respond to customer requests.