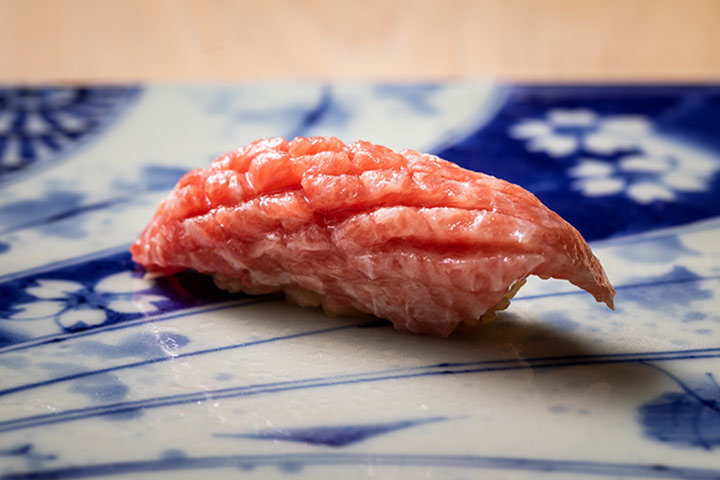 "Sushidokoro Kurosugi" is a world gourmet guide award sushi restaurant situated on the 2nd floor of the Shin-Daibiru building which houses many of the signature restaurants in Osaka's Kitashinchi district.

The owner, Akihiro Kurosugi, was raised in Hiroshima by parents who ran a fishing business. Attracted by the idea of preparing food in front of his customers, he sought a career as a sushi chef after graduating from high school and started work at an Edomae sushi restaurant with locations nationwide. He served a 12-year apprenticeship at ""Kenzan"", in the Hotel New Otani Osaka, before opening his own restaurant in 2003 at the youthful age of 30. The restaurant then moved to its current location in the tenth year after it was established.

The menu features seasonal ingredients, including fish from the specialty tuna wholesaler ""Yamakuki"", and items are serviced half from Toyosu(ex-Tsukiji) fish market, while the other half are purchased directly from breeding centers across the nation, allowing customers a taste of Tottori crab, black throat seaperch, Oita oysters, and other seasonal seafood. Although it focuses mainly on Edomae sushi, ""Kurosugi"" has also evolved to incorporate aspects of the Kansai culinary tradition. For instance, the sumeshi (vinegared rice) is prepared by mixing hard-boiled Hinohikari rice with mildly acidic red vinegar and salt, resulting in a simple flavor your taste buds will never tire of. Since its opening, the restaurant has also been popular for its carefully prepared side dishes, including Kurikara grilled eel and boiled monkfish liver with sake-pickled vegetables. ""I wanted to create a restaurant that would be popular with men and women of all ages,"" says ""Kurosugi"" of his intentions. The decision to establish additional lunch-time hours, made after the move to its new location, also came from this desire to make sushi more accessible. In keeping with that spirit, courteous attention is paid to customers during all hours of business with care given to the smallest details, such as the temperature at which food is provided and the interval at which dishes are delivered, ensuring a comfortable meal for all. The staff also includes a sake master and sommelier, making the generous selection of wines and sake poured with courteous service another strong point.