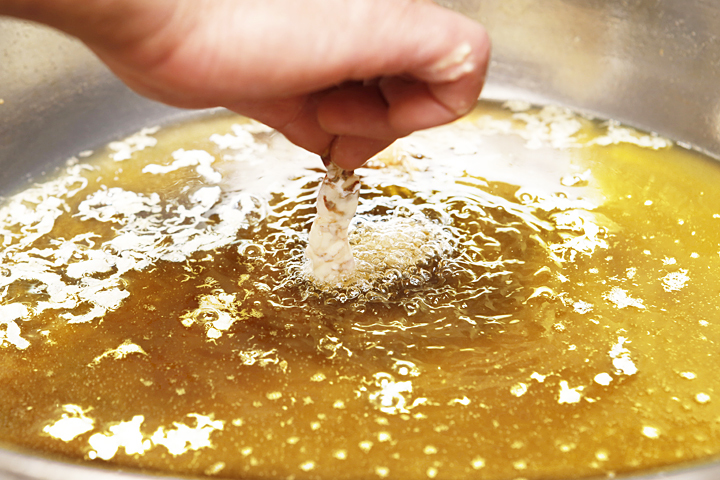 Tenkou Honten is a world gourmet guide award tempura restaurant in the heart of Hiroshima, near the Ebisu Shrine, known as the god of commerce. Chef Kenichi Higuchi and his son Takahiro together offer Edomae-style tempura at the counter at this kappo-style restaurant.

Before running his own restaurant, Chef Higuchi spent over 13 years polishing his skills at Tenichi, a long-established tempura restaurant in Tokyo. From manager of Ginza Tenichi to zone manager of major locations such as Akasaka, Shibuya, and Shinjuku, he takes the Edomae-style tempura to new heights. In 1988, he went independent and open his own restaurant in his hometown of Hiroshima. In 2009, he entrusted the restaurant he was then running to an apprentice, and opened Tenkou Honten in search of even greater culinary heights. That was also when Chef Higuchi's son Takahiro, who was at the time in university, began training under his father's guidance. Takahiro's pedigree was evident to the extreme, and a year after graduating from university, he was already making the tempura as the master's right-hand man. Today, he is also responsible for sourcing most of the ingredients.

The tempura at Tenkou Honten is fried in a way that keeps the original flavor of the ingredients. The premium tempura is made with ingredients carefully-selected by the chef and his son. The focus on seasonality and the origin can be seen on ingredients such as Japanese glass shrimp from Toyama Bay and Iwakuni lotus root in spring, Japanese anchovy in June, red cutlassfish from the Seto Inland Sea and maitake mushrooms from Megahira in nearby Hatsukaichi in summer, Kurahashi conger eel in fall, and small fugu (puffer fish) from Nagoya in winter. To frying the tempura, the same high-quality oil used at the upscale Tenichi restaurants is also used here. Accompanying the tempura are lemon and seaweed salt from Kamagari in Hiroshima. Items like abalone and rosy seabass are also served with truffle salt, which was discovered by Chef Higuchi during his trip to Paris.

Meals starts with salad and sashimi, preparing the palate for the tempura to come. The first round of tempura is followed by fried kobashira (clam adductor muscle), prawn (greasyback prawn from the Seto Inland Sea or prawn from Oita), or mitsuba (also known as Japanese parsley) and your choice of either tempura on a bowl of rice, tempura and green tea over rice, or small pieces of tempura with rice.
The Tenkou Honten style ends the meal with the tea prepared by the chef. Only the very best ingredients are used here, such as the koshihikari rice from Aizu, Fukushima, and matcha is also from a top producer. Even the drinks are all selected by Chef Higuchi, offering sake primarily from Hiroshima, Yamaguchi, and Mie. For warmed sake, Kamotsuru Chotokusen Tokutoushu from Hiroshima is available. Tenkou Honten's wine list is also extensive, with Champagne, Kenzo Estate's Asatsuyu white, and upmarket red wine from Burgundy.

The 8 counter-seating is made of real Kiso cypress, while the bulk of the dishes are made by Mie Prefecture ceramics manufacturer Hironagagama. Behind the counter, Chef Higuchi and his son's culinary skills are on display. ""We don't divide the work. We're father and son, so we can communicate without words,"" says Chef Higuchi as he reflects fondly on the strides his son has made. Their father-son act makes a great accompaniment to a meal among friends, family, or coworkers. Both father and son can communicate in English. Moreover, Chef Higuchi is also capable in Italian and Spanish, making Tenkou Honten the ideal place for foreign visitors.