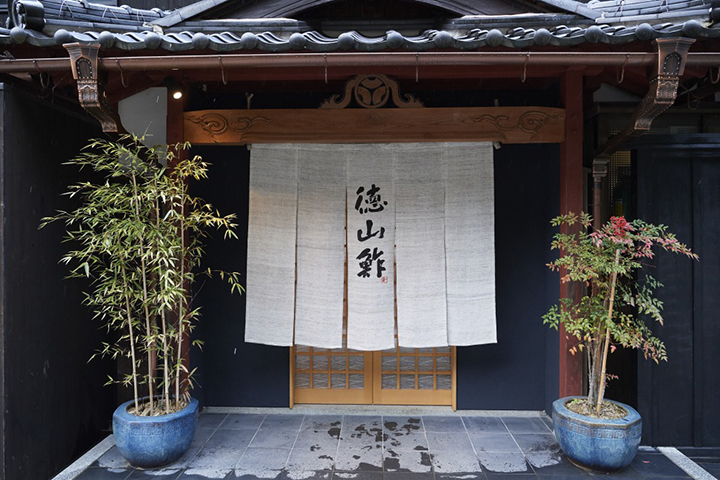 A preacher of fermented cuisine. An auberge with local cuisine overlooking Lake Yogo in Shiga

Many gourmets from not only Japan, but also overseas would visit “Tokuyamazushi” in search of the taste of "Narezushi (fermented fish sushi)", which is only available here. Nagahama City, Shiga Prefecture is located at the north end of Lake Biwa on the shores of Lake Yogo. In this place, which blends in with the original landscape of Japan, chef Hiroaki Tokuyama welcomes guests with his daughter Mai and her husband Nayuta.

Born in Shiga Prefecture, chef Tokuyama trained at Kyoto's long-established restaurant “Kawashige” after graduating from high school. Later, when he was serving as a chef at a local auberge, he met Professor Takeo Koizumi of Tokyo University of Agriculture, known as Doctor of Fermentation. While chef Tokuyama was trying to do something about fermented food, which he had been watching his father making since his childhood, since it had begun to decline in recent years. As Professor Koizumi said to him, "The time of fermentation is coming", he made up his mind. Focusing on the local cuisine "Narezushi", after much trial and error he came up with a unique "Narezushi" that was easy to eat for many people. The reputation of its taste spread quickly, and in 2004, “Tokuyamazushi” became a popular local restaurant attracting gourmets from local and abroad. “Tokuyamazushi” is also supported by his right-hand man, Mr. Nayuta. While training at 1-star kappo “Gion Kawakami” in Kyoto, he met and married Ms. Mai, the eldest daughter of “Tokuyamazushi”. After that, he studied under his father-in-law, chef Tokuyama, and now he is the sous-chef. Ms. Mai also help with the cooking and service, the whole family supports “Tokuyamazushi”.

"Narezushi", which is fermented with fish, salt and cooked rice by lactic acid, is said to be the origin of sushi, with unique strong flavor. Chef Tokuyama broke the conventional concept and created his own unique way of fermentation to create a "narezushi unique to Tokuyamazushi", that gradually brings out the umami. The course consists of the famous "narezushi", wild edible plants from the mountains in the spring, eel and ayu in the summer, and wild game meat in the winter. The "Kuma-nabe", which appears from winter to May, is served in a secret soup recipe made with vinegared rice from narezushi by chef Tokuyama. In particular, when you enjoy it with the Szechuan pepper, which is only available for a short period from late April to early May, you can enjoy a special flavor that spreads out in the mouth, so reservations rush in at that time.

"We would like our customers who come all the way here to enjoy local produce for local consumption, that is, local ingredients grown within a few kilometers of the restaurant," chef Tokuyama said. As he has the fishery rights, he goes to lakes and rivers to catch pond smelt, carp and eel, catches wild game ducks and boars as much as they need, and grows vegetables in the fields. Wild vegetables are harvested at different locations on a periodic basis, and efforts are being made to protect the natural environment so that they can be preserved for future generations. "To cook deliciously without wasting ingredients harvested by oneself. A sense of responsibility for food has grown more than ever," Mr. Nayuta said.

For Japanese sake, only 4 kinds of Junmaishu of Tomita Shuzo "Shichihonsai", which is located in the next town within 10 minutes by car, are available. This is because the water that is used are same as the one used for sansai (wild vegetables), vegetables grown in their own garden, rice, fish from Lake Yogo, so it goes well with the food. This has been the same obsession since it opened. Wine is also special. The restaurant is so particular that they talked with a New Zealand maker and asked him to make an original Riseling that goes well with "narezushi of Tokuyamazushi". In addition, 10 kinds of champagne, red and white wine are prepared, mainly from Japan and France.

As the restaurant has a view of the lake, the dining room is made with lots of wood and has a natural feel. There are 4 private rooms (2 to 4 people and 6 to 8 people). “Tokuyamazushi” promises special time, special space, special taste and special hospitality at the lakeside of Lake Yogo in Shiga. Spend a relaxing time as an auberge with your family, friends, food lovers, or even on dates.

Access
There is a shuttle service to and from Yogo Station. (JR Hokuriku Main Line (Maibara - Omi-Shiotsu))