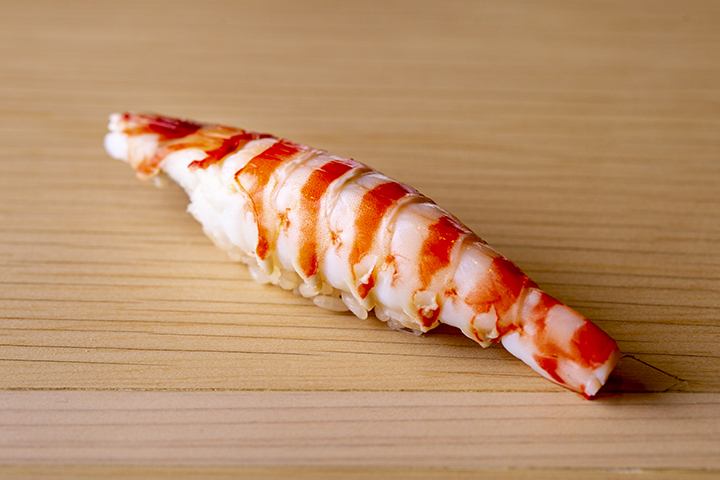 The restaurant is located 5 minutes walk from Karatsu Station on the JR Chikuhi Line in Saga Prefecture. When you walk along the old-fashioned shopping street, you will come to a sushi restaurant called “Sushi Tsukuta”. The owner Yuji Matsuo, and his son Bunpei, make "Karatsu-mae" style sushi, and theirs is the only famous restaurant in Saga Prefecture that has received two stars. Sushi connoisseurs come from all over Japan and abroad to sit at one of Sushi Tuskuta’s seven counter seats and enjoy their renowned sushi.

Chef Matsuo is from Saga Prefecture. His parents own a sushi restaurant “Yasuke” in Karatsu. After his graduation from university, he worked for a food company and then entered the world of sushi at the age of 24. The turning point was a meeting with a local potter, Takashi Nakazato, who took him to “Kiyota” sushi restaurant in Ginza, Tokyo, where he ate the best conger eel nigiri he had ever had. He continued to visit Kiyota for 2 more years to try out the taste and learn how to cook and in 1993, he took the next step and opened his own restaurant. The restaurant name “Sushi Tsukuta” is a combination of ‘Kiyota’ and the location of the restaurant in Tsukudajima in Tokyo, across the street from each other in Ginza and Tsukiji. Chef Matsuo’s son, Bunpei, trained under his father for 10 years and also trained in Tokyo, and now he makes Karatsumae-zushi together with his father.

Of the ingredients used at Sushi Tsukuta, 80% are various types of seafood caught from the sea of Karatsu, with the hope that people will enjoy sushi that can only be eaten there. They are very particular about using local ingredients in Karatsumae sushi. The rice for the sushi is made from Koshihikari rice which is grown locally and then sold in the Karatsu market by one of chef Matsuo's classmates and is made using only red vinegar and salt. Of course, conger eel is chef Matsuo’s favorite sushi. "I use well-treated Tsushima conger eel so I can get closer to the conger eel sushi that the chef who influenced my life at “Kiyota” makes" Matsuo said. Seasonal vegetables are used as side dishes before the sushi. When the season comes, the Japanese yam, which is grown without the use of pesticides by “Sasaki Farm”, is finely ground and used in a variety of dishes such as fried eggs and tuna with grated yam. As for Japanese sake, they have several pure rice sakes such as "Hokusetsu" from Sado, Niigata and "Tanaka 65" from Itoshima, Fukuoka, which pair well with the sushi and also have umami when served warm.

The seven counter seats, which are made of cypress wood, really stand out in the restaurant as the black cloth on the wall accentuates the whiteness. In another nod to Chef Matsuo’s past, the Karatsu ware made by the potter Nakazato, who introduced him to Kiyota, is often used. At Sushi Tsukuta you can enjoy delicious Karatsumae style sushi made by father and son chefs, Matsuo and Bunpei in a relaxing environment. Here you can enjoy meals, such as dinner parties or dates with family and friends and they also have an English menu, making it a perfect choice for entertaining overseas guests.