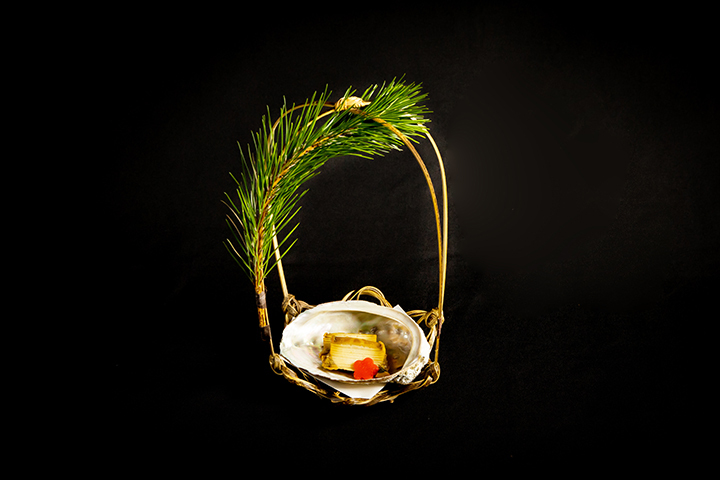 With 400 years of heritage and traditions in Nagoya, diners are invited to enjoy classical Japanese kaiseki cuisine in a prestigious setting — the essence of the four seasons

Located in Sakae, the center of Nagoya, Ryotei Kawabun is renowned for its 400-year history. A five-minute walk from Marunouchi Subway Station, guests will initially be overwhelmed by the majestic sukiya-zukuri-style gate. The aoi-mon (mallow pattern) noren hanging at the entrance also gives a sense of the store's status and history.

Ryotei Kawabumi was opened around the time of the construction of Nagoya-jo Castle in the Edo period. At first, it was founded as a fishmonger, and later, its connoisseurs were recognized by the Owari-Tokugawa family, and it has continued its history as a restaurant to this day.

After the Meiji period, visiting dignitaries from Japan and abroad (including former prime ministers such as Hirobumi Ito and Shigeru Yoshida and former French President François Mitterrand) would frequent the restaurant. Recently, in November 2019, Ryotei Kawabun was chosen as the venue by Foreign Minister Motegi for the dinner of foreign ministers from the G20 Summit, serving Japanese cuisine using seasonal ingredients from across the country, starting with Aichi Prefecture.

The main sections of the current building have been recognized as Registered Tangible Properties. The courtyard and Mizukagami no Ma were designed by Taniguchi Yoshiro, a leading Japanese architect in the Showa period, who also designed the Togu Palace and the Imperial Theater. It has been beloved until today as a guesthouse with deep history and tradition.

The restaurant serves seasonal kaiseki dishes crafted from regional ingredients mainly from local producers; a particularly lauded specialty is abalone steamed with salt. The menu has been around since the Edo period, and cooking methods have been passed down orally for generations in Kawabun. In addition, there is a new breed of trout called Kinuhime salmon, which is produced in the northern part of Aichi Prefecture through selective breeding, and other local ingredients which are not widely known yet are actively prepared for guests here.

Drinks offered include wine and sake, with about 30 varieties of white and red wine from Kenzo Estate in the United States, or from the Hirakawa winery in Hokkaido; likewise, guests can choose between 15-20 kinds of sake, of which more than 5 kinds of local sake hail from Aichi Prefecture. This is the only venue in the Tokai region where rare items from breweries such as Asahio Shuzo are available.

The restaurant has 11 counter seats and 7 private rooms, each accommodating 2-30 guests. During the daytime on weekdays, a tearoom (cafe) service is also offered. In addition to couples who enjoy the atmosphere for dates, many guests also choose to visit with their families and children to commemorate important milestones, from wedding anniversaries and shrine visits to memorial services. Service is also available in English, Chinese and Korean for overseas guests, and all the menus are explained verbally.

Seasonal decorations are also popular. For example, there are a variety of luck charms held at the end and beginning of the year, the largest Mochihana in Japan, the Doll's Festival, and Boy's Festival, which have been handed down from generation to generation.

Experience the history and traditions of Ryotei Kawabun, and savor the nuances of the four seasons.