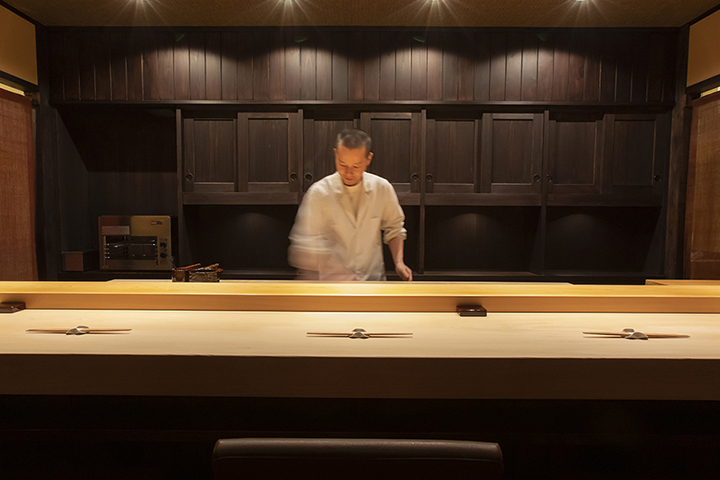 A three-star sushi restaurant in Ise, Mie Prefecture, helmed by a former Araki chef who follows the example of his master to continue improving the flavors of sushi rice and fish

Komada is a three-star sushi restaurant in Ise, Mie Prefecture, a town known for the Ise Shrine and the old streetscapes reminiscent of historic Edo-era neighborhoods. Komada is a popular destination restaurant frequented by sushi lovers from around Japan, with sushi elaborately made by chef Kenri Komada, with great attention paid to the sushi rice and fish.

Komada changed his career from a white-collar worker to a cook at the age of 28. First, he worked at a Japanese restaurant in a hotel, and then, he opened his own sushi restaurant in Ise. In his sixth year there, however, driven by the desire to hone his culinary skills in Tokyo, he asked for an apprenticeship at Araki in Ginza, a renowned sushi restaurant. After two years of apprenticeship, he returned to his home prefecture and opened Komada in its current location in 2013. The reputation of his culinary skills honed at Araki spread by word of mouth, allowing his restaurant to expand its clientele and rapidly win three stars in six years.

“My apprenticeship at Araki changed the way I make sushi,” he says. Although he cannot completely reproduce the master’s sushi-making techniques, he explores his own style using similar techniques. The fish and shellfish are sourced not only from local markets but also from Toyosu Market, which he became familiar with during his apprenticeship in Tokyo. Likewise, the sushi rice is elaborately made with aged rice, and seasoned only with red vinegar and salt before being carefully cooked so that it does not stick together but falls apart. The temperature is carefully controlled to be slightly higher than body temperature.

The drinks menu always consists of seven to eight labels of Japanese sake selected from 30 of the chef’s favorite brands, including Yuki No Bijin from Akita, Shichihonyari from Shiga, and Tanaka Rokujugo from Fukuoka, among others from around Japan. Takasago from Mie, which he describes as “perfect,” stays on the menu year-round. Guests can also ask the chef to recommend Japanese sakes to pair with their sushi.

While the exterior appears historical and atmospheric, inside the restaurant is a calming atmosphere, with guests seated at a six-seat counter made of solid cypress wood. Expect a variety of tableware at meals here, ranging from Iga ware from Mie to Karatsu ware from Saga, Bizen ware from Okayama, and Mino ware from Gifu as well as from antiques to handcrafted works by contemporary artists.

Located in Ise, Komada allows guests to enjoy the sophisticated flavors of sushi with a family, partner, or friends in a relaxing environment.

Access
A 10-minutes walk from Ise-shi Station, the JR Sangu Line or the Kintetsu Yamada Line