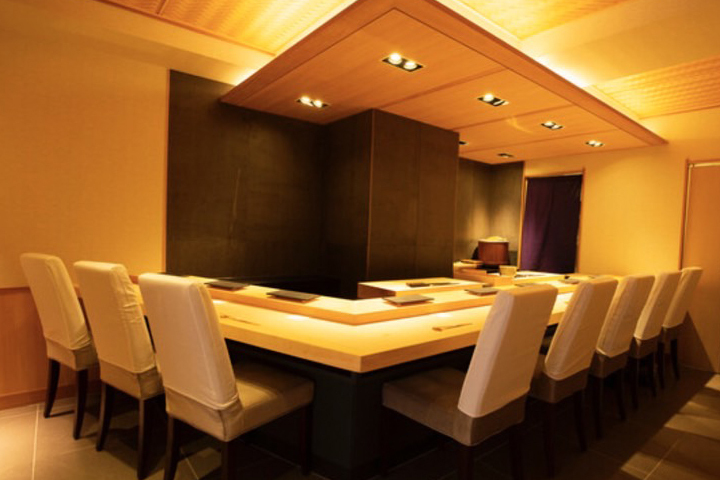 Sushi Ryo is located in Ginza 8-chome, at the doorstep of Tsukiji Market. When owner-chef Ryo Sasaki decided to strike out on his own he chose Ginza, the sacred ground for sushi restaurants.

Chef Sasaki honed his skills at Sushi Takahashi in Ginza for six years before becoming independent. He opened his own shop, Sushi Ryo, in July 2020. At the time, the restaurant attracted attention as "a sushi restaurant opened in Ginza by a sushi chef just 24 years old".
The course consists of four side dishes followed 10 to 12 pieces of nigiri. The Sushi Ryo style is to choose the best ingredients every month as the main dish. For example, in August, bonito is featured in nibbles through to nigiri. Seafood is sourced from the Toyosu Market. The tuna comes from Yamayuki, a wholesaler specializing in tuna many famous restaurants in Japan fight to be the first to do business with. The nigiri is Edomae style. The vinegared rice is a blend of rice produced in Yamagata Prefecture and four types of vinegar: red, white, and black. The temperature of the sushi rice is adjusted to match the generously cut sushi toppings.
Great attention is also paid to side dishes and a Blackthroat Seaperch Rice is a specialty in which blackthroat seaperch nigiri is topped with a seasonal thick sauce. In August, it would be a summery dish of grilled blackthroat seaperch on a bed of vinegared rice mixed with edamame and topped with grilled eggplant sauce. Another feature is the inclusion of fried foods such as fried fish and chicken, which is rare in sushi restaurants.
On the last Friday of the month, a "Premium Course" is offered, using higher grade toppings than usual. You can also enjoy a little more extravagance than usual.
The sake list features 20 to 30 kinds of famous brands, including the "Ishidaya", "Nizaemon", and "Muni" labels from Kokuryu in Fukui Prefecture. A wide selection of other drinks is also available, including wine white and Champagne; shochu made from sweet potatoes ("Yamaneko" and "Maou"), rice ("Torikai"), and barley ("Yaezakura"); whiskey ("Yamazaki", "Hakushu", and "The Macallan"), and non-alcoholic offerings.

The L-shaped counter (8 seats) made from a single block of cypress, the sacred tree of the Mitsumine Shrine in Chichibu, Saitama Prefecture, is an eye-catching feature of the restaurant. The plates are mainly Arita-yaki ware, but antiques and Karatsu-yaki are also used. Among these, the sushi serving plates made from Arita-yaki ware were designed by Chef Sasaki himself abound with originality.
Sushi Ryo is full of pride as a next-generation Edomae master, even while breathing new life into the scene. Visit with your family, friends, business associates or as a couple and enjoy the essence of Edomae.