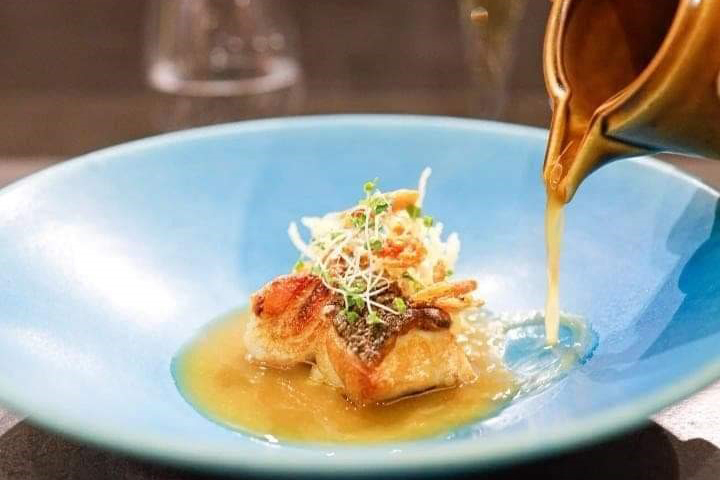 A 15-minute drive from JR Hachinohe Station or a 20-minute walk from JR Shirogane Station on the Hachinohe Line will take you to a restaurant with light-brown and lemon-yellow walls reminiscent of the bright sunshine of Italy. That is Casa del cibo, which opened its doors in a residential district in Hachinohe City in southeastern Aomori Prefecture in 2011. Take a step inside, and you will be welcomed by a chic interior with a counter and tables with white cloths.

Casa del cibo is helmed by Chef Ryohei Ikemi, who studied the basics of French cuisine in France while he was going to École Culinaire Kunitachi. After returning to Japan, he worked at a French restaurant in his home prefecture of Kanagawa, but subsequently he switched to Italian cuisine, honing his culinary skills at Italian restaurants in Tokyo, including Enoteca Pinchiorri, DA Noi, and Incontro. Then, he opened Casa del cibo in Hachinohe, Aomori, with his wife, Etsuko, who serves as a sommelier.
The menu features local ingredients, especially seafood, which are transformed into simple yet elegant dishes by Chef Ikemi. For example, one of the chef’s specialties, Affogato of Octopus, is a result of his attempt to create a memorable dish with minimum ingredients. He has reinterpreted a classic dish of stewed octopus in tomato sauce from Napoli in southern Italy by using stock made from octopus and dried tomatoes and taking care not to stew it too much to prevent it from losing its shape. The octopus is directly sourced from a fisherman whom he describes as a man who surprised him with his fresh, high-quality seafood. Casa del cibo also offers a specialty pasta cooked with local sea urchins and abalone and meat dishes featuring Gin no Kamo (a famous brand of wild duck from Aomori), Aomori Shamrock (locally produced chicken), and domestic boar, which is rarely produced in Japan. All these ingredients are transformed into flamboyant dishes with great care so that guests can discover the sophistication of cuisine and the beauty of colors.
The wine list mainly consists of Italian wines, selected to match the dishes by Sommelier Etsuko, who graduated from the same culinary school as the chef. The wine pairing menu offers flexible options, such as a glass of wine for each dish (full pairings), half a glass for each dish, or fewer glasses per meal.

Renovated into a chic and discreet design in 2020, Casa del cibo has a main dining room with a four-seat counter and two private rooms, and a semi-private room. The restaurant attracts many guests from near and far, including families and couples who celebrate anniversaries with intimate dinners as well as solitary diners who come to savor the delicious dishes of Chef Ikemi. Guests can dine with children in either of the two private rooms though, in principle, the restaurant can only accommodate children of primary school age or older who can dine quietly.
As indicated by its name, Casa del cibo, which means the house of delicious food, the detached restaurant boasts a chic interior that provides a laid-back, homey dining experience and offers simple yet amazing dishes that showcase the chef’s excellent skills. It is definitely worth trying an intimate dinner at Casa del cibo.