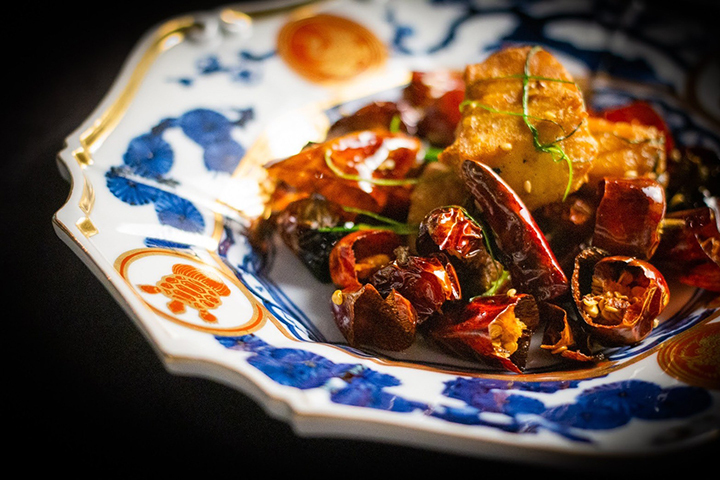 Celebrate the triumphant return of a top-ranked chef from Shanghai. Enjoy his dynamic yet subtle dishes at his new Chinese restaurant in Ginza.

M_Mugen, which opened on the first floor of a building on Ginza 7-Chome, a neighborhood filled with renowned restaurants, has been attracting keen interest since Chef Tatsuhito Uchida moved his sphere of activity to Ginza after carving his way to the top of Shanghai’s restaurant scene.

He started his career in Chinese cuisine at the age of 15. He first trained at Jukei Hanten, a famous Sichuan restaurant, in the Chinatown of Yokohama but decided to move to China at around the age of 20, after a short trip to the country. He learned Chinese at Shanghai University and honed his culinary skills at Galaxy Hotel Shanghai and Grand Soluxe Zhongyou Hotel Shanghai. Then, at the young age of 24, he opened his own restaurant, Guangyan, with the ambition of making it the No. 1 restaurant in Shanghai. His dishes combining dynamic Chinese culinary traditions and Japanese culinary finesse were called “Japanese-style Chinese cuisine” and immediately gained popularity. In fact, he won first prize three times in the Chinese category of the Shanghai Restaurant Awards. Having dominated the city’s restaurant scene, he made a long-awaited return to Japan, where he opened his restaurant, M_Mugen, on Ginza 7-Chome in November 2022, again aspiring to be No. 1 in Japan.

As implied by the restaurant’s name (“Mugen” means “infinity” in Japanese), Chef Uchida’s dishes have infinite potential. His specialties include Buddha Jumps over the Wall Soup, made by steaming precious ingredients such as shark fin and abalone for a few days, and Beggar's Chicken, which is baked in dough like a pie. Another must try at the restaurant is Mapo Tofu, which has been highly praised as “the best ever in China” by Chinese people proud of their own food culture. Although M_Mugen only offers a prix-fixe menu with about 11 courses, diners can select their last course from three options of Mapo Tofu, noodles, and fried rice.

The drink menu offers Shaoxing rice wines as well as a remarkable collection of wines selected by the chef. The wine cellar holds almost 100 bottles of wine, mainly from France but also from Japan and the US. Guests can also ask the sommelier to pair wines with their dishes.