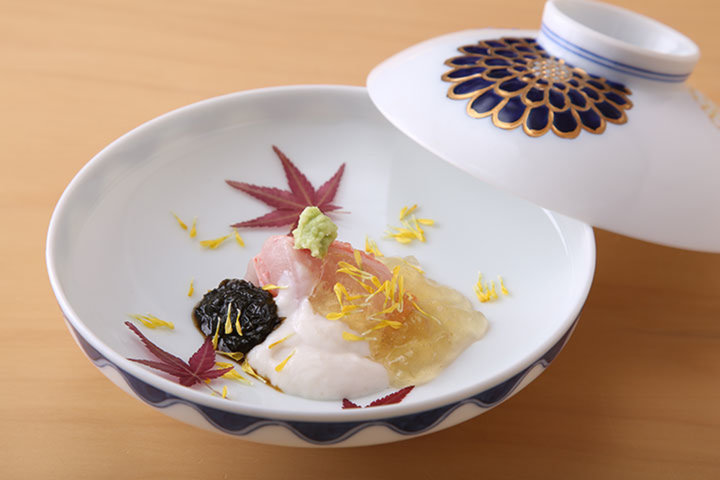 A Japanese restaurant that pursues traditional style and innovative elements

The secluded Japanese restaurant "Yoshiatsu" is situated in a tranquil location about a 10-minute walk from Hiroo station. It is attracting attention as a restaurant that offers a new, outside-the-box approach to deliciousness while respecting the traditions of Japanese cuisine.

The proprietor, Yoshiatsu Fukushima, has had a versatile career, starting his training with four years at Kyoyamato, the venerable Japanese restaurant in Kyoto, before gaining experience in hot pot restaurants and traditional Japanese restaurants in Tokyo, then showing off his culinary skills in various genres as the executive chef at a restaurant corporation. He set out on his own in October 2016, opening "Yoshiatsu" as a restaurant that pursues traditional styles and innovative elements within the framework of Japanese cuisine.

Both lunches and dinners are mainly offered in the form of courses. With a strong desire to contribute to the culinary culture of Japan, the ingredients are mostly sourced domestically, with the menu structured by incorporating seasonal ingredients such as crab and fugu in the winter, and edible wild plants in the spring. The aroma of each ingredient is savored, while taking into account their balance with umami to create and combine each dish, compiling them into a course. One of the specialties is rice cooked in an earthen pot, which varies from season to season, including firefly squid and wakame seaweed in the spring, wild eel in the summer, and matsutake mushrooms and saury in the autumn. Other well-received delicacies include the novel Bottarga Dog, which is a sandwich of bottarga on bread made with rice flour and garnished with half-open buds of Japanese basil. Drinks include a lineup of Japanese sake and wines from around the world, with suggestions offered for pairings with food.