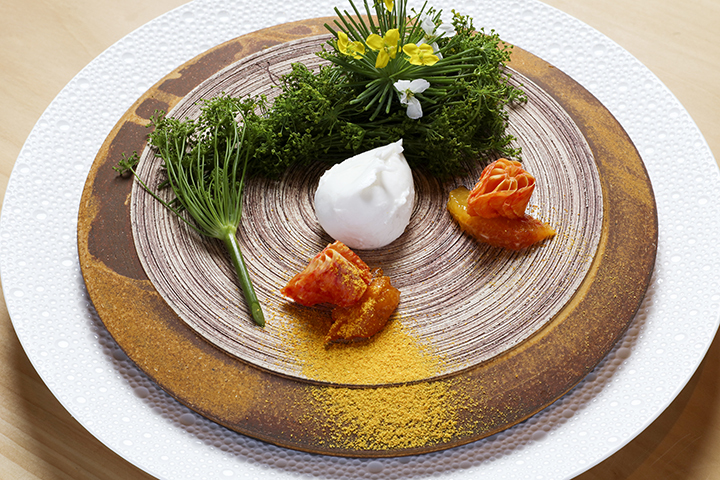 Chef Kawaguchi is from Shintomi-cho, Miyazaki Prefecture. He worked at “PILAW∴”, a French restaurant in Ogikubo, Tokyo, founded in 1958 and studied under chef Takashi Hattori. While still working at the restaurant, he was sent to be trained in the United States and Italy, and established “Miyazaki PILAW∴” in 2001. After training in America and Italy again, it was relocated to the current location in 2010. In 2018, he opened “Okibi kawaguchi∴” in the same building. Together with his younger sister, Nana, who has experience as a sous-chef at a starred restaurant in Italy, they perform the 2-chef system. In addition, he has recently traveled around the world such as Bangkok and New York, and has deepened exchanges with chefs in various places. He has learned not only about the ingredients but also about the food culture of the country, and through his own filters, he has expressed a unique world view that is not just fusion cuisine.

Based on the "Cuisine that takes advantage of the terroir" that both chefs learned in Italy, “Okibi kawaguchi∴” focuses on ingredients in Kyushu like Miyazaki, then uses the charcoal to cook. It all started when chef Kawaguchi, who saw someone cooking in the fireplace in a farm in Italy " Agriturismo", and recalled his father grilling a whole fish over a campfire. Inspired by that, Kawaguchi scooped up wood from the pizza oven at “Miyazaki PILAW∴”, which serves Neapolitan pizza, and started cooking over a charcoal brazier.

The restaurant uses reliable ingredients that show the face of the producer, "I want to convey the feelings of producers along with the food". Kawaguchi's father and his friends, who were fishermen, deliver fresh seafood and he also uses chicken from the "Kuroiwa Dotori", which is naturally grazed on Mt. Ozu in Miyazaki. The main meat is Miyazaki brand wagyu beef "Ozaki beef". It is one of the few restaurants in Japan that can serve it as a designated restaurant. The restaurant also uses vegetables that are separated from the producers in Miyazaki Prefecture and grown in their own farms in Miyazaki.

Particular about the drinks as well as focusing on the natural wine that matches the tone of the cooking over fire, the restaurant also provides alcohol pairing that uses the local sake of the shochu brewery and sake brewery that has a long history in Miyazaki. They also have tea from “Shinryokuen” in Kawaguchi's hometown, Shintomi-cho, selected by Shingo Kuroki, who is a tea master with title that only around 10 people nationwide has.

There are only 6 seats at the L-shaped counter in the restaurant, where you can feel a sense of harmony. The interior is decorated with plaster, which is inspired from the layers of Takachiho-kyo over the storehouse door, and there is also "Okudo". Enjoy the cuisine and space of “Okibi kawaguchi∴”, which could only be found in Miyazaki, with family and friends. In addition, service is also available in English and Italian, so it is also recommended for entertaining overseas guests.

6:30pm The meals will all start together