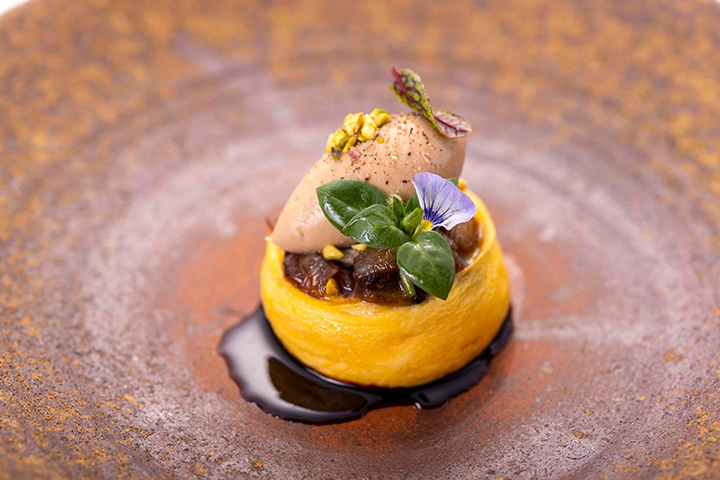 In Hirosaki City in the center of the Tsugaru region in Aomori Prefecture in northeastern Japan, Osteria Enoteca da Sasino is perched on the second floor of a building a 10-minute drive from JR Hirosaki Station, the gateway of the provincial city with a distant view of Mt. Iwaki to the northwest, which is also known as Tsugaru Fuji for its beautiful shape. An elegant iron gate with lion motifs at the entrance welcomes guests to this Italian trattoria.

Osteria Enoteca da Sasino was opened by Chef Michiaki Sasamori in his hometown of Hirosaki in 2003. Since then, he has offered Italian dishes featuring local ingredients from Aomori Prefecture over two decades. Before opening Osteria Enoteca da Sasino, he trained at three restaurants in Japan and then visited Italy in 2001 to further hone his culinary skills. He won the Silver Award at the Cooking Masters organized by the Ministry of Agriculture, Forestry and Fisheries in 2019 for his long-standing efforts to promote the local food culture and received a number of other awards, including a Bronze Award at an international cheese contest in France in 2015 and a Bronze Medal at the Japan Wine Challenge in 2018.
However, his culinary flair is not the most prominent feature of the trattoria, which is characterized by growing grapes, among other vegetables and fruits, to produce wine in their facility. The trattoria even offers homemade charcuterie products (processed meats) and cheese. Now, Chef Sasamori is often seen growing vegetables and herbs in the farm when he is free from the kitchen. He is one of the first persons to run a farmer’s restaurant and has continued it up to the present.
He also goes fishing, depending on the season, catching bluefin tuna, tilefish, blackthroat seaperch, yellowtail, and gold-striped amberjack, among others. These culinary treasures of the northern prefecture of Aomori are transformed into delicious dishes full of love for the locality by the chef who knows Hirosaki better than anyone else.
The wine list includes wines brewed by the chef himself at Fattoria da Sasino (one white, two reds, and one spumante) as well as a cider brewed from apples grown in Aomori, wines from Italy and France (mainly Bourgogne), and Japanese wines such as Tsugaru from Suntory. Food and wine pairings are also offered, including Sasino wines.

Inside the restaurant is a white-toned stylish dining room with a touch of wood grain, furnished with five tables (seating up to 10 guests in total). School-age or older children can dine at the trattoria (choosing dishes from the à la carte menu, such as pasta). Younger children can also dine, depending on the day. In addition, overseas guests are accompanied by English- and Italian-speaking staff. Chef Sasamori’s culinary world attracts many guests, not only from within the prefecture but also from around the country. They visit Osteria Enoteca da Sasino for family gatherings, dates, and anniversary celebrations. Please enjoy the world created by Chef Sasamori to celebrate the bounty of Aomori, along with his delicious dishes.