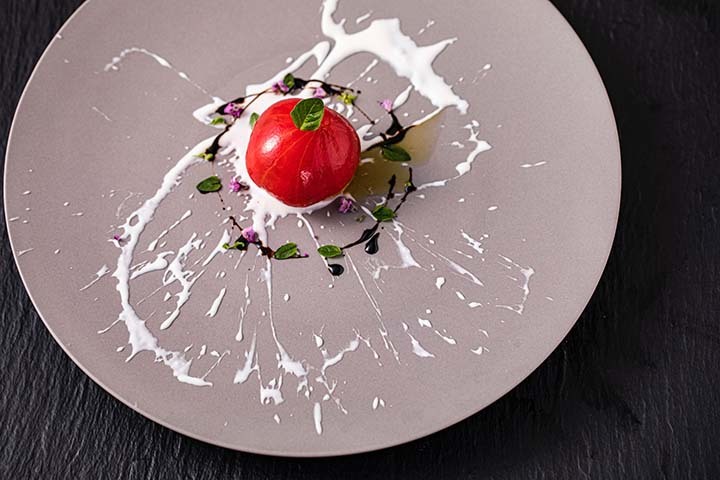 Enjoy a fusion of Chinese and Italian cuisine offered nowhere else but here in Takasaki, Gunma

Located in a convenient place a 10-minute walk or a base-fare taxi ride from JR Takasaki Station, one of the hubs of the Northern Kanto’s transport system, FAN×DALCUORE sits in a tranquil residential area. Take a step into the restaurant, and you will find yourself in an extraordinary, modern space.

FAN×DALCUORE is helmed by two chefs, Hiroaki Hoshino and Nobutomo Suzuki. Chef Hoshino returned to Japan in 2020 after training at Din Tai Fung, a world-renowned Taiwanese restaurant famous for its soup dumplings, and serving as a chef at CHINESE FAN, a casual restaurant offering dim sum (a large range of small Chinese dishes) including soup dumplings, in Barcelona, Spain. He was reunited with Chef Suzuki, who worked as a chef at an Italian restaurant called Dalcuore, and together they opened the restaurant. To offer a rare combination of Chinese and Italian cuisine, the two chefs went through numerous instances of trial and error, such as incorporating Italian ingredients (e.g., tomatoes) into Shangtang (luxury soup made from meat and bones as an essential part of Cantonese and Taiwanese cuisine) before they created original dishes only available at FAN×DALCUORE.
As one of the specialties offered from June to September, the Confit of Sweetfish with Homemade Uruka Sauce and Fermented Tomato and Watermelon Sauce features wild sweetfish caught by Chef Hoshino, who is a sweetfish angler traveling around Japan when he is not occupied by work at the restaurant during the fishing season. While his fishing friends sell their catch to renowned restaurants in Tokyo, Chef Hoshino uses all his fish at his own restaurant. The homemade uruka (salted entrails and roe of sweetfish) is enriched with tomato to add an Italian flavor to the exclusive sauce of FAN×DALCUORE. In winter, the restaurant also offers Shanghai crab pasta and gratin, bringing a smile to every diner’s face.
The drink menu offers wines, mostly from Italy and France, to be paired with the dishes as well as Japanese sake locally brewed in Gunma. The paring menu includes both alcoholic and non-alcoholic (tea) options. The non-alcoholic drink menu mainly consists of organic Japanese green and smoked teas from the Tea Company but also offers homemade drinks, such as grape juice flavored with star anise and cinnamon to go well with meat.

In the modern, monotonous dining room dimly lit with indirect light to set a chic mood, there are two tables with four seats each. In addition, the restaurant has a private dining room seating up to eight guests. This private dining room can be reserved for ordinary meals with children and infants. A special menu for pre-school children is available if asked for in advance.
FAN×DALCUORE is perfect for special occasions, such as wedding anniversary and birthday celebrations, as well as family gatherings, business dinners, and dates, but recently the reputation of the two chefs has also attracted an increasing number of food lovers. One thing for sure is that the fusion of Chinese and Italian cuisine only available at FAN×DALCUORE makes the restaurant worth a visit.

Access
10 minutes walk from the west exit of Takasaki Station