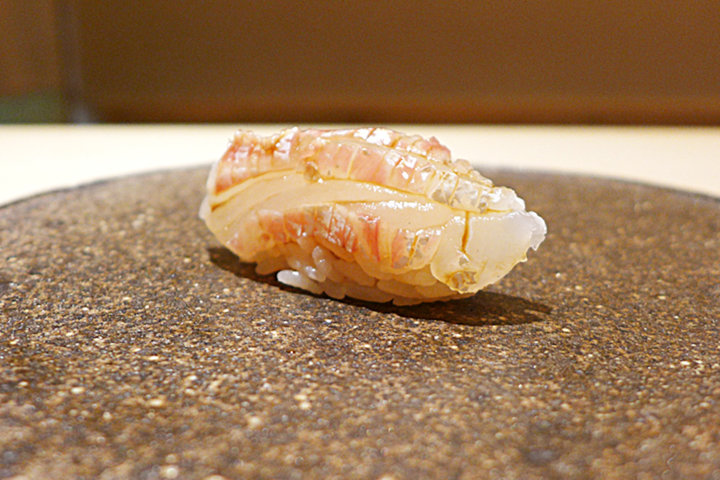 Japan’s youngest world gourmet guide award restaurant. This sushi restaurant in Matsuyama, Ehime crafts its offerings with the spirit of “sushi is life”

Boasting 3 stars in international travel guides, Dogo Onsen is mentioned in Nihonshoki, an ancient history book, and it is said to be the oldest hot spring resort in Japan. Kuruma Sushi, a world gourmet guide award sushi restaurant, is located in Ichibancho, Matsuyama, home of Dogo Onsen. Sushi-loving gourmets frequently visit here for the masterful sushi crafted by the young second-generation chef, Koji Takahira.
Chef Takahira grew up looking over the shoulder of his father, the previous chef of Kuruma Sushi, and began his training in Kuruma Sushi’s kitchen as he started high school. After graduation, he went to Tokyo and dine at different sushi restaurants. Moreover, he asked to be trained at restaurants he liked. He worked at a Japanese restaurant for a year, and later studied diligently at Ginza’s world gourmet guide award Sushi Yoshitake for 5 years. In 2017, he made his long-awaited return home, and took over his father's position behind the counter at Kuruma Sushi. The young chef's unique approach to fish attracted even more Kuruma Sushi fans, and it earned 2 stars in the blink of an eye. He was only 27 years old at the time, making him the youngest holder of 2 stars in Japan. It became a popular restaurant known not only in Matsuyama, but nationwide.
“What surprised me most when coming back to Ehime was the lack of stress in the fish and their aroma,” says Chef Takahira. In Ehime, they have their own way of treating their fishes. For example, the fish is not wrapped in kombu seaweed to add flavor. The reason, he explains, is that “the fish caught in Ehime are stress-free, so there is no need to add flavor.” He can also judge whether fish should be aged, or whether aroma should emphasized. Marbled flounder is marinated at 8 AM, and it is not allowed to bleed, to preserve the flavor. Threeline grunt is aged for 7-10 days, and grilled before it is made into sushi. Firm, fresh sea bream is served in 3 thin slices so that it will meld with the sushi rice more easily, and he spares no effort, doing his utmost to ensure that the flavor is at its peak when the sushi is placed in the mouth. For the sushi rice, he uses a Yamagata variety called Tsuyahime, with a blend of 4 kinds of rice and red vinegars. To ensure the rice is firm on the outside and tender on the inside, he starts cooking the rice in a special customized hagama pot to coincide with the start of the meal. His commitment to flavor extends to his Rishiri kombu seaweed, which is matured in a storehouse for 3 years.
The sake selection has more than 20 varieties at any time, with local Ehime sake like Ishizuchi and Itto Ryodan, as well as fine sake from around Japan, such as Akita’s Aramasa, Mie’s Zaku, and Fukui’s Kokuryu. The wine is selected by Chef Takahira, who is also a qualified sommelier, and focuses on French vintages, including champagne and white wine. He also stocks natural wines, for which he seeks for the best sushi pairings.
The interior sits only 8 at the single plain wood counter. The tableware consists mainly of 350-400 year-old pieces of vintage Imari ware, Tokoname ware, and Eiraku. Furthermore, blue-and-white porcelain from China’s Ming Dynasty and modern pieces such as Karatsu ware by Taki Nakazato are also used. This wide collection shows Chef Takahira's love of antique objects. “Sushi is life,” says Chef Takahira. At Matsuyama’s 2-star Kuruma Sushi, when you enjoy his wholeheartedly crafted sushi, you will undoubtedly experience a passionate discussion about sushi with the sushi connoisseurs packing the counter. 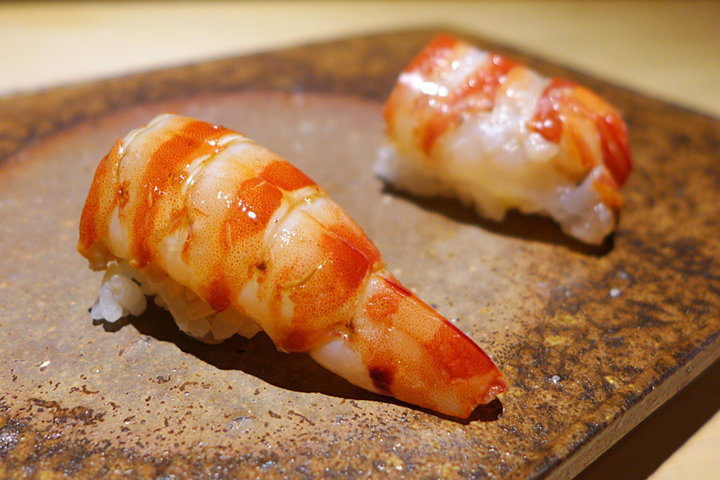