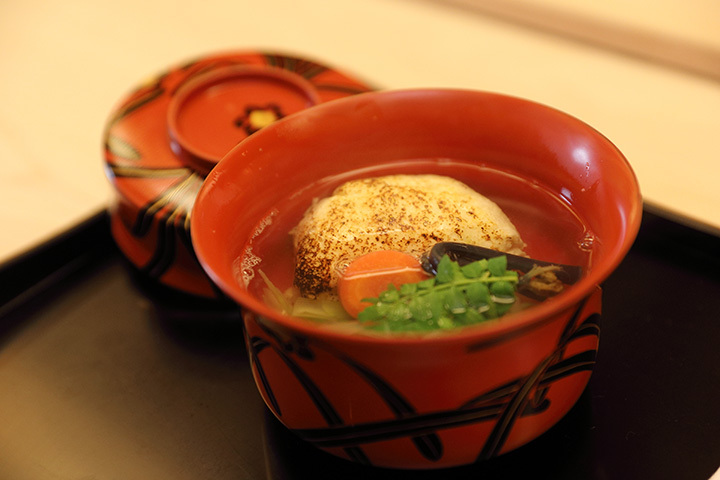 Okayama City in Okayama Prefecture is a popular tourist destination with a variety of attractions, including Okayama Korakuen Garden, known as one of the three most beautiful gardens in Japan, and Okayama Castle. You will find Kuikiri Ryori Happou, which is located close to Shirosita tram stop that is a 15-minute ride from Okayama Station. The restaurant is helmed by Chef Toshiya Hamura, who is known as a prominent figure in the Japanese culinary world in his hometown of Okayama.

Chef Hamura trained at a Japanese restaurant in Osaka for five years and returned to his hometown, where he opened his first Japanese restaurant, Hinaichi, in 1984. Thereafter, he opened Japanese restaurants around Japan and eventually opened Kuikiri Ryori Happou in 2018 as a compilation of his journey throughout the culinary world and was awarded two stars in a famous restaurant guide.
“Kuikiri ryori is a type of over-the-counter kappo cuisine developed in Osaka and other parts of the Kansai region. It is characterized by serving small portions of simple yet tasty dishes that bring out the true flavors of the ingredients so that guests can eat every bite. We deliver once-in-a-lifetime dishes to our guests while communicating with them over the counter,” says Chef Hamura. His skills honed over a long time and his elaborate dishes fascinate the patrons of the restaurant named after his parents’ restaurant near Saidai-ji Temple.
Many of the ingredients are carefully selected and locally sourced, including Asahi rice from Okayama. The popular homemade fish sauce is made from small fish from the Seto Inland Sea. The precious blue eels, said to have originated from Okayama, are delivered in the best quality and cooked on their firm skin. Rather than being steamed first, they are just grilled over indirect heat from charcoal for 40 minutes until thoroughly heated, though this takes more time and effort.
In addition to these local ingredients, other ingredients sourced from around Japan, including longtooth grouper from the Kyushu region and Kaga vegetables from the Hokuriku region, are also carefully selected, and delivered by producers with whom Chef Hamura has personal ties. The dashi soup stock is made using a generous amount of Japanese kelp from Rishiri, Hokkaido, as it plays an extremely important role in cooking. The Bowl of Softshell Turtle, the restaurant’s signature dish, features turtles fed on tea leaves grown in Nagasaki and cooked to bring out their rich, umami flavor.
The sake list offers a wide selection of high-quality Japanese sake mainly from Okayama, such as Sanzen, Takaji, and Taiten Shiragiku, but also from other parts of Japan, such as Juyondai from Yamagata, Jikon from Mie, and Hiroki from Fukushima.

Behind the counter made of solid hinoki cypress wood is an ice box, which makes this Japanese restaurant look as if it were a sushi restaurant. The collection of tableware selected by Chef Hamura, who says that “tableware is also an important element of a dish,” ranges from antiques to Bizen ceramics from Okayama, Arita ceramics created by Kakiemon and other artists, and blue and white porcelain from China. With an eight-seat counter and a private room (seating up to eight people), this Japanese restaurant is perfect for special celebrations. In fact, it is also a popular place for marriage proposals.
Undoubtedly, the kuikiri dishes and warm service of Happou make the dining experience special and unforgettable.